“Thought for despair? No! I am part of a living struggle. And without struggle, there is no movement, there is no life.’

I was reading in the Guardian recently about the Kenyan novelist Ngũgĩ wa Thiong’o. Admittedly, I had never heard of him. Ngũgĩ was imprisoned without trial for a year in 1978, during which time he wrote his memoir, ‘Wrestling with the Devil.’ Quoted in the article is his longstanding belief that, ‘The theme of resistance, and writing in prison, is eternal.’[1]

Ngũgĩ’s initial ‘crime’ was language. He wrote and staged a play, ‘Ngaahika Ndeenda’ (‘I will Marry When I Want’) in Gikuyu, his mother-tongue, choosing to employ local people with little money or experience as his stars. Scratching his memoir into the folds of prison toilet paper, Ngũgĩ outlines how his oppressors were ‘seeking some kind of confession’ of his guilt against the ruling order; an admission of his political ‘sins’ that were subversively inscribed in his memoir.

In the article, Ngũgĩ is quoted discussing his reasons for writing in Gikuyu and ceasing to write in English – a question often raised about his writing.

What Ngũgĩ describes is an exile from his own language, dating back to when Kenya was taken over by British settlers in the late 19th century, and a desire to reclaim it. He suggests how Africans have, throughout history, been colonised in every sense of the word: in life and in language. Ngũgĩ describes the slave trade, where individuals were forced to surrender their language, even their own individual names, by their white colonisers.

Words inscribe identity. One’s own language is connected to an origin. Relinquish language and we relinquish our sense of self. While Ngũgĩ wears his own language like a badge of honour, he discusses how some Africans view it as a shroud of shame.

It’s clear to me even now that English is a colonising force, with a lot of countries seeking to resist its pervasion into their native language. Even in Europe, I am viewed to many as a coloniser, seeking to pollute language with my English tongue. Whether we like it or not, we still hold the weight of our colonial history in each word that we speak.

Writing in Gikuyu was Ngũgĩ’s statement against enforced colonisation by other languages. Only his mother tongue is apt to bear witness to his persecution. 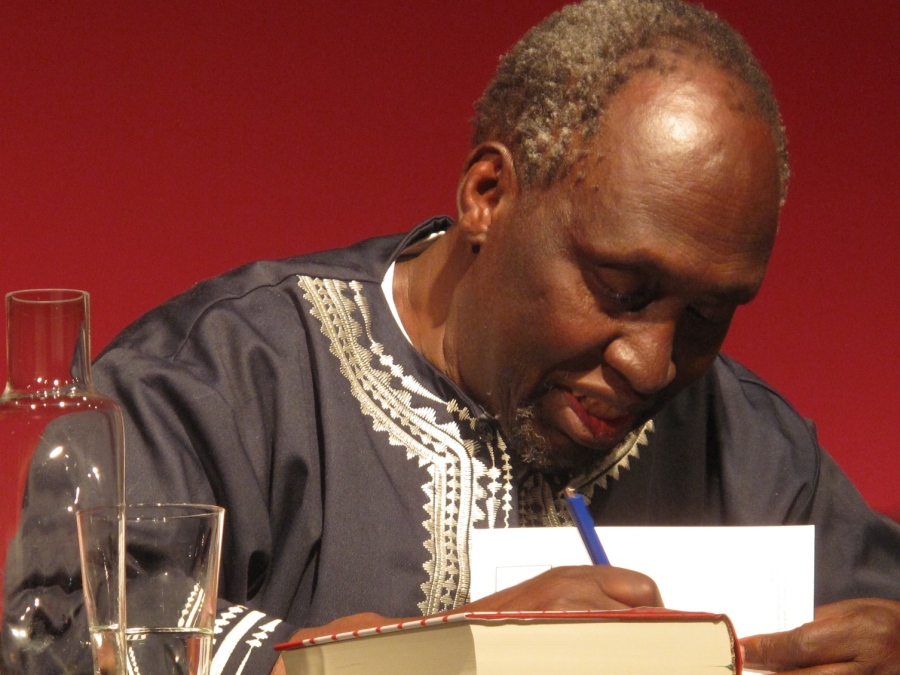 Language inescapably ‘bears witness.’ It becomes infused with the authority of history and experience. Terms become loaded with associations, fraught with connections to suffering. It is for this reason that Theodor Adorno (German philosopher and sociologist) said, and I quote in translation, ‘Writing poetry after Auschwitz is barbaric.’

This is a difficult phrase, even more so in German, even more so taken out of context. But my interpretation of this is that language becomes loaded; impressed upon by people and cultures held at ransom. Adorno thought that language after such periods becomes inadequate to express such horror. To persist, after Auschwitz, in the production of ‘monuments’ (in this case, poetry) is to participate in the perpetuation of that ‘barbaric’ culture. But what does this mean for language?

If to write is somehow to participate in barbarism, then is not to write to abstain from guilt?

In another article from The Guardian, Ngugi wa Thiongo’ describes the sight of ‘men, women and children in a convoy of barbed-wired lorries being forcibly relocated from their lands to make room for white settlers. They sang a sorrowful melody, but one that described their love and solidarity in hardship.’[2] He was ten years old.

History lives in language, in song and in melody. Inscribed in the barbed-wire lettering of caged men, women and children and the gates of Auschwitz.

A writer engraves his or her own identity in their words. Choosing to write in Gikuyu was the beginning of Ngũgĩ’s conception of himself as differing from the white writer’s self-image. Embracing his African origin is testimony to how language, used in the right conditions and for the right purpose, can be an assertion of power and agency.

Ngũgĩ writes: ‘I return again and again, in person, and in my writing, for the same reason that I have clung to my Kenyan passport, like a religious relic, that reminds me of the unfulfilled dream the caged men and women once sung about.’[3]

Words can, literally, get lost in translation. I will be reading Ngũgĩ wa Thiong’o’s memoir, ‘Wrestling with the Devil’. Perhaps not in its authentic language, but with authentic empathy and interest.

[1] Information and quotation informed by this article: https://www.theguardian.com/books/2018/mar/12/ngugi-wa-thiongo-wrestling-with-the-devil-interview