After finishing my degree in English Literature, I travelled to the Yorkshire dales with my dad to visit the house of the Bronte’s – something I have wanted to do since I was a child. The maze of Haworth’s moors and precarious country pathways seemed to uphold the same shroud of mystery that had always, in my mind, been placed upon the Bronte sisters. Treading amongst the heather that speckles the grassland with majestic purple flowers I imagined the likes of Cathy Earnshaw or Jane Eyre – fierce female characters of the Bronte novels – clambering over the moors in search of their lost loves, and strangely felt at home.

It is true that no body of work has ever inspired me as much as that of the Bronte sisters. Three eighteenth-century women, each with an extraordinary intellect and a deep understanding of human nature; each subjected to the same fetters that all Victorian women were shackled to, managed to create texts that are continuously remembered and reimagined today. Like the ghosts that haunt their novels, they linger in the English imagination.

So who are the Brontes?

Picture a morose widowed father, a tragically inebriated brother, a house overlooking a graveyard and the wild expanse of the Yorkshire moors and you get the setting of the Bronte sisters. Sound like a gothic novel? Now you see where the Bronte’s got their inspiration from.

There were four children: Charlotte, Emily, Anne and their brother Branwell, who all grew up in a house at the foot of the moors. Patrick Bronte – a Cambridge graduate and longstanding Reverend of Howarth Parsonage – bestowed upon his children the gift of an enriching home education. It was here that their genius was kindled. Storytelling became embedded in daily routine. Feeding off each other’s minds, they grew inside their fantasy world and cultivated stories based on their immediate environment: the rugged, tumultuous moors and the domestic routine of the family home. As I trekked through the moorland, I felt the whispers of Cathy and Heathcliff whip round my ears with a bluster of wind. It is in the idyllic, yet treacherous, expanse of the moors that the Bronte’s characters come to life. 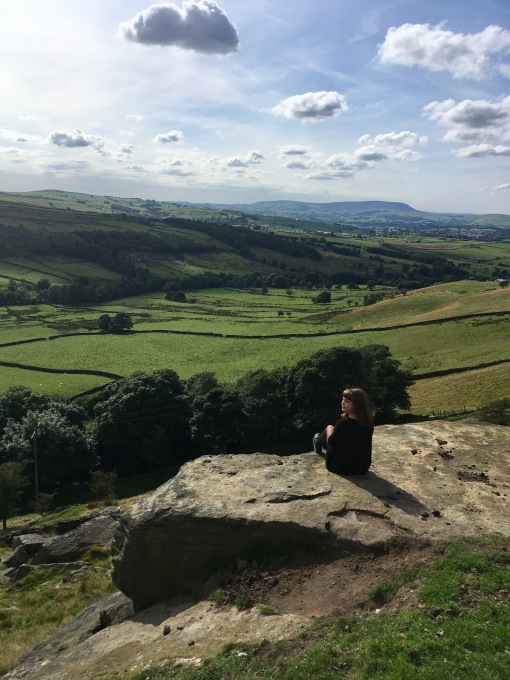 The Bronte sisters have reached almost mythical status based on an understanding that they wrote such extraordinary books sheltered from the world in the confines of their home. This isn’t exactly true. Emily Bronte was not a lonely spirit shut away under the tyranny of her father, but a woman who actually enjoyed the comforts that cooking over a stove could afford. While her chief protagonist, Cathy Earnshaw of Wuthering Heights, ran heedlessly to the turbulent terrain of the moors, Emily wished to sit by the fire, composing her stories in time to the click of her knitting needles.

The home was a powerful symbol for Emily and Wuthering Heights attends to its invasion. The female sanctuary becomes impaired by the violence of tyrannous villains and divisive social conventions, even the sublimity of nature when the branches of an oak tree penetrate the haunted chamber of Lockwood. While demonic in aspects of their characters and the treatment of each other, Heathcliff and Cathy possess a love that is otherworldly. Cathy exclaims that ‘he is more myself than I am.’ The lovers become central to each other’s understanding of the point of existence. After Cathy dies, Heathcliff spends every waking moment wishing that he were in the earth with his beloved. It is this extinction through the elemental forces of nature that each character strives for, and eventually achieves.

We may put whatever emphasis we will on the fact that a peaceful coexistence beyond the grave is strikingly implausible for a modern audience, but the fact that Heathcliff and Cathy, ill-fated and fatally flawed, can maintain a love across the boundary of life and death is quite a remarkable concept in my eyes.

Perhaps it’s the lack of real emotion in our society that makes these novels appear, to some, like classic, empty love tales. Those old romantic tremors in our hearts, described so intimately in romantic novels as the pangs of love, are now felt as vibrations of our phones, notifying us of a ‘like’ on an Instagram selfie. Our concept of love has been diluted, reduced to the gratification of an extra ‘super-like’ on Tinder. Emily Bronte would be turning in her grave.

I don’t believe in ghosts but I believe in the heights of human passion.

And this is what the Bronte’s do. They make you believe and experience the full spectrum of human nature. They demand recognition of women’s experience as charged with intense bodily and emotional feeling.

In Anne’s The Tenant of Wildfell Hall, Anne recounts the story of Helen who leaves her drunken husband Mr Huntingdon to create a new life for herself and her child. Possibly influenced by her brother who was bent on boozing himself into an early grave, Anne paints a portrait of a Byronic figure of great fascination, but also of vast moral failings. In a rather mocking and derisive tone, Mr Huntingdon says, ‘I have an infernal fire in my veins that all the waters of the ocean cannot quench’ – words that don’t belong in the mouth of such a shallow individual. These words are really for the novel’s heroine, and for Anne herself. Women stifled, but not broken.

In a diary, Anne longed to ‘go out into the world, to act for myself, to exercise my unused faculties, to try my unknown powers.’ The Bronte sisters possessed knowledge of their own strength and capability – a lesson to women everywhere to harness the ‘unquenchable’ fire stoking inside them. Jane Eyre – Charlotte’s novel that tells of a woman who must establish true independence before marrying – ends with the family house set ablaze. The fire decimates, purges, yet creates anew.  It is thus atonement with nature, and with oneself, that is the pinnacle of human achievement in these novels.

The Bronte’s works have always symbolised to me what I believe to be absolutely true and vital in life. The novels deal with the most fundamental, mythical and primal aspects of human nature. It is for this reason that they remain so important not only to myself, but to the canonical history of English Literature.

6 thoughts on “The Bronte Sisters: A Literary Obsession”